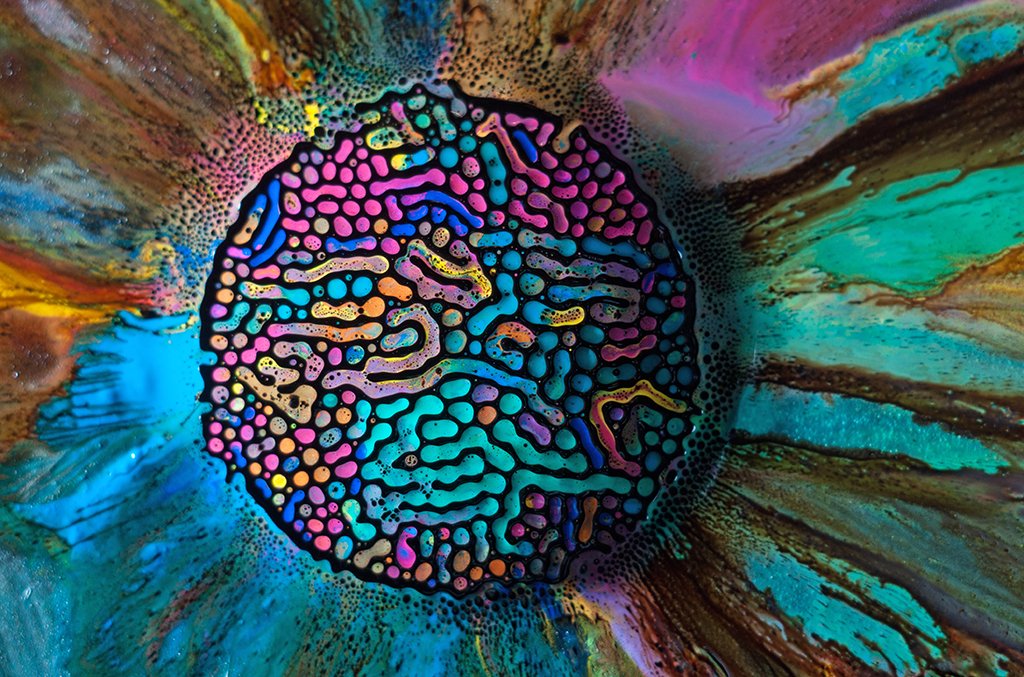 When I first saw Fabian Oefner’s work I, like most everyone else, was immediately struck by its intensity, vividness and sheer beauty. Some of it reminded me of Keith Haring’s trademark patterns and colors (like the image above, from the “Millefiori” series), while other pieces looked cosmic, or even microcosmic. But I had no idea how they were created. Most likely a series of sketches . . . or a experiment . . . or maybe the latest photos from Hubble. As it turns out, the latter was actually the most accurate guess.

Oefner is a photographer whose mission is to demonstrate the inseparability of science and art by capturing otherwise unseen reactions and interactions of both ordinary and exotic substances. Thus, Oefner refers to his subject matter as “The Invisible Dimension”. The photographs in the “Millefiori” series, for example, document the results of mixing with ordinary watercolor paints.

Watch Oefner demonstrate the process in his recent Ted Talk (embedded below), where he also presents images of crystals being vibrated by sound waves, shot at 3,000 frames per second, and images of a flame escaping a glass bottle shortly after igniting its contents — which happen to be oxygen and Scotch whiskey.

You can also find more of Oefner’s images on his site: http://fabianoefner.com/

inFrame is a weekly series, in which Memetic Arts features an artist whose work is driven — as are we — by the intersections and congruencies of art, science and technology.

Processing is a Java-based visual programming language, developed by Casey Reas and Ben Fry to give visual artists a simple way to create data-driven artwork.
is the browser-optimized version of OpenGL, a software library used for rendering 2D and 3D graphics in realtime, as commonly seen in video games and Virtual Reality simulations.
Ferrofluid is a liquid which becomes strongly magnetized in the presence of a magnetic field
Posted by rrodkin at 5:11:32 pm
PrevNext
Recent Posts
Categories
Archives