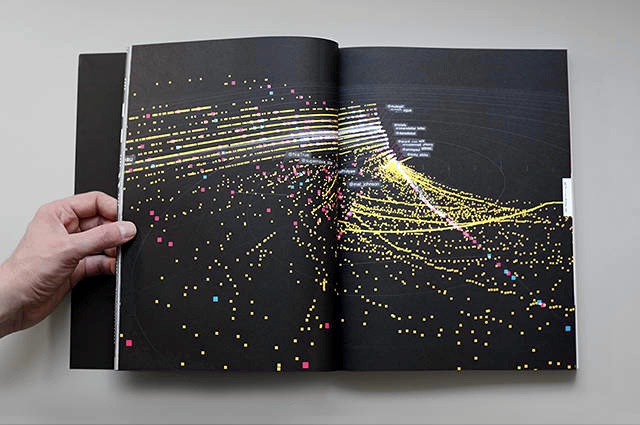 Creative Application Network (CAN) announced today the release of the first issue of their much anticipated “HOLO1”, a “book-a-zine”, which has been in production since its successful funding on Kickstarter over a year ago. The CAN site is devoted to reporting on all things related to the Art/Sci/Tech field, and the magazine is meant to be the print embodiment of that ideal.

At first, it might seem ironic that an organization so focused on cutting-edge technology and art would even think to produce a print piece of this nature. But in watching the original Kickstarter video, we quickly learn that HOLO was conceived as a relief from the web, and as a vessel to catch what its creators perceived to be the plethora of content that was lost through the fast-paced nature of the web, content that required materiality for it to be properly experienced and consumed. As Creative Director Alexander Scholz says in the video:

“Making a print magazine in 2012 is admittedly a bit of a romantic affair. We love the presence, and the straightforwardness, and the formal elegance of the medium, and think that it is as relevant as ever, because the more that we extend our lives into the web, the more important the tactile objects that we choose to surround ourselves with become. We hope that HOLO will be one of them.”

And hey we like books. And we like the idea of some planned away-time from the web. But maybe a DVD insert next time? It would be great if we could actually experience some of the pieces discussed, in an off-web, yet electronic environment.

Not to complain, though. The bookazine is gorgeous, designed by zmyk, and weighs in at a hefty 226 pages which also include:

HOLO 1 also utilized some generative and conditional design processes to realize parts of its layout concept and cover, which is a very cool crossover from digital to print. HOLO Issue 1 is available for purchase as single copies for $35, or as a two-issue annual subscription for $60.
Posted by rrodkin at 9:52:30 pm
PrevNext
Recent Posts
Categories
Archives