Overview
Welcome to the Lab

As you might expect, app development entails a fair amount of experimentation and revision. And while there are certainly moments for learning what not to do, there are victories along the way, many of which we’ll share with you in the moment, right here. We’re posting these not just because we think they’re cool (well, ok, that’s part of it), but also because we want to get your feedback early, so that we can improve our products while they are still being built and tested.

In some cases, as you’ll note below, we’ll be posting galleries of screenshots and stills, while other examples are fully interactive pieces of what will soon be complete apps. Please feel free to leave comments and feedback at the bottom of the respective pages.

Digital Harmony Extended is an interactive documentary whose aim is to revisit John Whitney’s seminal work “Digital Harmony: On the Complimentarity of Music and Visual Art”, and not just clearly explain the basic concepts, but to reimagine them in the context of today’s knowledge and technology.

Whitney used Polar Equations to generate the shapes that became the hallmark of his work. Shortly after his death, a new “range” of shapes, derived from Polar Geometry, was discovered. These shapes were created with an equation called the SuperFormula, and not only extends Whitney’s harmonic vocabulary, but blasts it forward. Follow the links below to see the results of our ongoing experiments with this amazingly fruitful mathematical equation.

Part of our discussion on Whitney’s use of Differential Motion, which was critical to his overall approach, will focus on his 1972 experimental short animation “Matrix III”. We are producing an interactive, performable version of the work, which we hope will facilitate the understanding of how Differential Motion works in specific contexts.

Artifish: Variation on a Dream 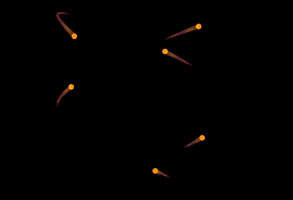 During the early rounds of experimentation with Matrix III Interactive, we took a look at Unity’s built-in Trail Renderer, and attached it to one of our animating circles. We discovered that with a little tweaking here and there, and moving at just the right speed, the trails actually behaved like the sinuous bodies and tails of eels, fish, or any number of imaginary sea creatures. And voila, Artifish was born. We’re not sure where it’s going just yet . . . maybe an app for kids, maybe nowhere . . . for now it’s just fun to watch a virtual fish tank with digital fish (for nerds like us, that is).

On 26 March, 2014, we learned about Google’s DevArt Competition, a contest focused solely on “Art made from code,” which presented the opportunity to compete for exhibit space at the Barbican as part of the Digital Revolution Exhibition slated for July of that year. The catch? The deadline was on 28 March, leaving us only two days to prepare a submission! What could we possibly create in two days? It would have to be something already in progress, yet something that was both interactive, accessible, fun, and engaging. Artifish!

As part of the final submission, contestants were required to post regularly to a dev blog detailing the project goals, process, code examples, etc. While the original entries are still live on the DevArt site, we also ported all of the entries over to this site as a mini dev-blog. Check it out and find out how things progressed over that crazy two-day period!

Another primary rule of the competition was that all code had to be Open Source. While this wasn’t a trivial decision, we decided to play along. You can find the code for the entire project over on GitHub.

While you can get a good sense of the results by watching this video, you can also try the actual prototype at http://artifish.memeticarts.com. This will currently run in your browser, but you need to download the Unity Plugin first. Have fun!!

We’re in the process of adding a full range of parameters and controls to WaveMaker, which started as a basic curve generator / line drawing routine, and we should have some initial versions ready in the coming weeks. In the meantime, please enjoy the gallery below, which documents the results of WaveMaker’s first iteration.